Meet the Veterinarians & Team of Redland Animal Hospital in Homestead! We’re pleased to provide exceptional vet care for your pets!

Georgia Maureen Bushnell was born in New Iberia, Louisiana, the youngest of five daughters. She grew up on the bank of the Bayou Teche in an area known for its love of family, good food and the beauty of nature. While older sisters were away at school, Maureen’s playmates were the family pets. Patient cats were dressed as babies and pushed in doll carriages and loyal dogs were willing companions in many exciting adventures.

Having been taught that a veterinarian’s first year of practice sets the standards for the rest of her professional life, the new Dr. Bushnell desired to further her veterinary education and hone her skills in an academic environment. She applied for and was fortunate enough to be awarded an internship in small animal medicine and surgery at the University of Georgia. The year was spent rotating through the medicine, surgical and emergency services leading a team of senior veterinary students while learning from Georgia’s outstanding small animal faculty and staff.

Finally ready for the “real world” of veterinary practice, Maureen moved first to Ft. Myers, Florida then finally to Miami in 1986. In Miami she met and married her wonderful husband, Miami native Gary Haskin. Their daughter, Taylor, is currently a college student.

Maureen took a bit of time off from the practice of veterinary medicine during her pregnancy and Taylor’s early years. During this time the family moved to Redland, five months before Hurricane Andrew paid it a call.

Arriving at Redland Animal Hospital in January 1993, Maureen worked only one day a week for the first two years. She then worked part time for another two years before purchasing the practice in 1997.

Maureen currently divides her time between the demands of veterinary practice and practice management, her family and friends, and activities ranging from boating and fishing to dog training and horses. She is on the board of the South Florida Horse Show Association and is a member of the Miami-Dade County School’s Agriculture and Natural Resources Advisory Committee.

Dr. Elizabeth Novy, a Dallas native, graduated from Texas A&M’s College of Veterinary Medicine in 2004. After graduation Dr. Novy moved to the west coast of Florida with her husband, working for four years in a small animal practice in Port Charlotte. In 2008, Dr. Novy moved to Miami and began providing relief veterinary services so she could care for her growing family. Dr. Novy’s family consists of her three young children, an eight year old Boxer mix, a 2 year old Field Terrier and three cats.

Dr. Luis Alvarez earned his Doctorate in Veterinary Medicine from U.N.L.P, Argentina and did an internship at Tuskegee School of Veterinary Medicine. He has been working in the Miami area since 2003 and is fluent in English and Spanish. His special interests include internal medicine, surgery, and dentistry. Dr. Luis Alvarez has completed multiple dentistry training seminars and labs. He is married, has 2 daughter, and many pets. On his time off he enjoys to travel with his family.

Melissa and her 4 siblings spent their childhood growing up in Winston-Salem, N.C. During her early adulthood she moved to Cutler Ridge and has been a Floridian since 1996. Her lifetime love and passion for animals lead Melissa to obtain her Certified Veterinary assistant Accreditation in 1997. Through her journey in the field of Veterinary medicine she has made it a well declared one, including previously working at RAH from 2001 to 2006 as their head technician. Family is her priority as she loves and enjoys her husband and 8 year old son D.J. The furry and feathered family members are Rocky (Belgian Malanois), Merry (K9 mixed), Sparch (Shepherd-mix), Cloud (umbrella cockatoo), Mija (green winged macaw), and last but not least Zazu (African-grey). All of her animals were rescues that needed someone to love.

Jamie has lived in Homestead, Florida most of her life. She graduated from Florida State University in 2012 with a Bachelors Degree in Family and Child Development. When she moved back to Homestead after finishing college, she found a growing passion for animals. She began working with a rescue organization called This is the Dog, which led her to become a client at Redland Animal Hospital. In 2013 she became an employee at RAH. She started off as a receptionist, then began working as a veterinary technician/assistant and now is one of our managers. She has one fur-baby, Emma. In September 2016, she welcomed her new pride and joy into her family, her daughter, Madison and will be welcoming her son, William, in December 2019. 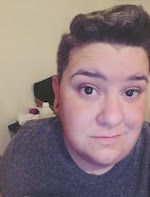 Jessie is a Miami native, born and bred in Kendall. She’s been a veterinary technician since the tender age of 16. She shares her life with her partner and 2 cats; her black cat named Mouse and the love of her life her brown tabby named Chicken. She has various exotic animals from avian to reptiles. Jessie has a tender and special way with felines as they are her passion. She also worked in a specialty vet for felines for 2 years while living in georgia. She volunteers at various rescue organizations. 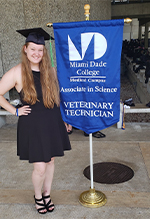 Alex started her veterinary medicine journey in 2014 when she started working at RAH as a volunteer at just seventeen. In 2015, she graduated from Robert Morgan Educational Center as a Certified Veterinary Assistant. After high school, she pursued an Associates Degree in Veterinary Technology at Miami Dade College and graduated in May of 2019. In December of 2019, she will be sitting for her VTNE exam to become a Certified Veterinary Technician. In 2020, she will be continuing her higher education in veterinary medicine as she works on a Bachelors Degree in Veterinary Technology and Veterinary Practice Management and becoming Fear Free Certified. She spends her free time loving a calico cat (Maggie Mae), a tortoiseshell cat (Rosalina Rae), a corn snake (Roo Snake) and her ever-growing orchid collection. 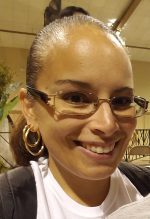 Addie has been in the veterinary field since she was 17 years old. Working with animals is a huge part of her life. When she is not at RAH she  loves spending quality time with her wife, two kids and let’s not forget “Kovu” the curious cat, 6 reptiles, a tarantula and scorpion. Addie also enjoys listening to music, writing, watching movies, arts and crafts and eating ice cream!

Lily was born in Denver Colorado, raised in Miami Florida. In 2009 I started my career as a vet tech. In 2014, I started motherhood with my daughter Lhya, along with my two loveable cats, Tux and Moo Moo. 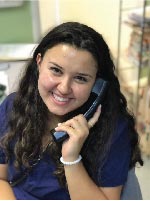 She graduated from Felix Varela High School as a Certified Veterinary Assistant. She grew up on a farm raising animals since a young age, this first triggered her passion for animals. Some of her crazy critters include dogs, cats, goats, chickens, pigs and rabbits. Savannah has been working in the Veterinary field for the past five years, and has been enjoying every minute of it. Savannah is currently enrolled at Miami Dade College pursuing her education further towards her dreams of one day being able to help not only pets, but pet owners as well by incorporating her want to help those in need. 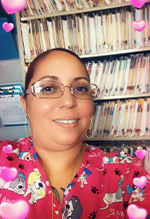 Cheryl has been in the veterinary field for 18years. Working with animals has always been a major part of her life besides her 6 kids and 1 beautiful granddaughter. When Cheryl is not at RAH, she manages her youngest daughter Daisha music career and she also has a catering business with her oldest daughter Tina who helps run it when Cheryl is at RAH. Cheryl has 5 Rescue dogs of her own including her 17yr old terrier mix “Bunnie” . In her spare time She loves to cook, travel and loves to watch her son Romeo play basketball and most of all loves to spend quality time with her kids when they are in town.